“Given enough time, almost anything could be achieved…“ 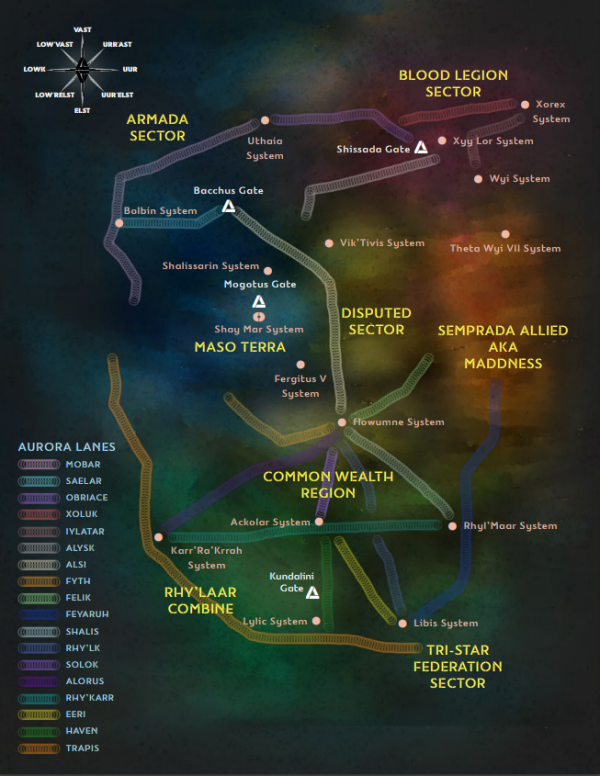 Qn'Tahr was an ageless galaxy that existed within its own unique universe. Billions of diverse sentient beings once inhabited the galaxy, each introduced to the scriptures of the Shalaymuh and the Tha'Ohkt, hoping their sacred teachings would elevate their civilizations to higher levels of salvation.

“Based around the cycle of pulsar Eurr'Aak Gamma Tau 6, Qn'Tahr's galactic calendar used an odd metric system to keep track of its current date.”

Birthed by The Mother, many viewed Qn'Tahr as an opportunity for civilizations to develop and flourish without fear of conflict. The galaxy was ancient, estimated to be well over half a billion years old. Its cosmic recesses reached lengths of over 300,000 lightyears from its elst points into its vast regions. Throughout its ages, inhabitance divided Qn'Tahr into sectors, established territories, and created lanes that enable faster than light travel. Sentient races who entered the galaxy did so via one of four nexus gates: Kundalini, Bacchus, Mogotus, or Shissada.

Upon arriving in Qn'Tahr, beings were originally greeted by the Light Shepherds of Kryllos. The shepherds would usher new flocks to established planets for a peaceful transition into the universe. Following the ancient war and into its modern era, the Rhy'Laar and Assiek assumed new arrivals' recovery and placement efforts to the galaxy. Qn'Tahr was home to billions of diverse alien races from across our known universe. Details of how individuals exited the galaxy are still unknown. Research is currently ongoing.

All sentient creatures within Qn’Tahr experienced a temporal anomaly that prevented any form of biological aging. Results of the perceived stasis had left some of the galaxy’s inhabitants existing for millions of dekrons, showing no difference in age since their arrival. The temporal stasis also affected regular food consumption and sleeping habits: beings could go dalls- days, or dalos- weeks, without experiencing hunger or the need to sleep. Likewise, individuals could sleep soundly for dalls when they tire. Though no aging occurred, an individual's physiological response to trauma remained the same. If left untreated, minor abrasions and lacerations could heal within a dalo. Severe traumas could be treated with advanced medical equipment, if present, and could leave physical scarring. Normal reproductive cycles were also affected, preventing any form of conception from taking place within the galaxy. Immune to this phenomenon were non-sentient creatures, fauna, stars, planets, and other celestial bodies. The aforementioned underwent normal life cycles but at slower rates. Researchers had no conclusive explanation for the phenomena. Although most graciously accepted the form of immortality, some cultures questioned their ontological purpose within the galaxy.

The radiant glow of Maso Terra stood as the shining heart of the galaxy, casting its celestial glow unto those who embraced beauty and righteousness. The Nohrd Commonwealth served as the galactic capital whose influences ran deep with those seeking power. Through Qn'Tahr's modern age, moments of peace were fleeting. Nearly every inhabited system had felt the might of the Armada’s aggression or the Commonwealth's political strain. The brave personnel of the Tri-Star Federation led the noble charge against these forces, fighting to restore the peace that once blanketed the galaxy during Qn'Tahr's golden age. Qn'Tahr was filled with heroes and villains, adventures, and perils. Only the bravest drifters have traversed its cosmos.

Most of the civilizations transported to Qn’Tahr were identified as type 1, meaning their society had achieved the technological capabilities of planetary travel within a single solar system. Comprising roughly 70% of the galaxy's residents, these societies were technologically proficient in rudimentary terraforming and establishing planetary infrastructure. They had mastery of the atom and relied heavily on nuclear energy and fusion to drive their society. Their space crafts were limited to travel within their system and were incapable of utilizing fold technology. Despite their limitations, many travelers viewed their abundance as a vital necessity.

To some, type 1 civilizations offered respites during long journeys or acted as sites of panicked emergency landings. Nohrd bureaucracy would notoriously put severe limitations on these systems to hinder their development. Using the Torq’Gan as an example, the Nohrd quickly reminded those of the potential dangers of lesser civilizations acquiring devices beyond their capabilities.

Most type 1 systems resided free of prejudice within the Combined. Their streets were rife with diverse markets where proprietors offered unique items to those who explored them. Black markets were present to those seeking something more exotic. These underground establishments often charging exuberant amounts of zel for contraband fuel and munitions and helped drive their local economies. Regardless of their criminality, these markets were usually mired with Nohrd bureaucracy. The Kal'Aa'Tarr'Ok and Tri-Fed worked tirelessly to foster these worlds to elevate them to technological and spiritual greatness.

Despite their best efforts, these systems occasionally fell prey to galactic warlords or became proxies during larger conflicts. The Nohrd openly scoffed at type 1 civilizations, often allowing wealthy patrons to target these systems for nefarious pleasure. Others like the Coathe looked upon these worlds with cruel indifference, lacking compunction if their actions had recourse on its inhabitants. Type 1 systems within Semprada housed more isolated civilizations, some with little knowledge of the outside universe.

Type 2 civilizations were uncommon within Qn’Tahr and comprised about 20% of the galaxy's population. A major step up from the former, these civilizations mastered space-fold technology and inter-system space travel. They had the technological ability to alter the evolution of both stars and planets; their cities were places of technological wonder where adventurers had access to virtually any amenity they needed. Their societies had mastered nanotechnology, completely eradicating harmful diseases. These systems were often used as refueling depots, military installations, or staging areas for large fleets. Sim Shavo patrols were common in these systems and usually harassed the more technologically primitive crafts in the area.

Type 2 systems were often well-protected from hostile attacks. Although many have fallen throughout Qn'Tahrs eras, such endeavors required a coordinated effort of thousands of ships to execute successfully. The most notable type 2 civilization was the Rhy'Laar. Travelers to systems under their control were always greeted warmly, and assistance was always given if needed. Rhy'Laar hospitality was famous within Qn'Tahr.

Among the rare, making up less than 1% of the population, were type 3 civilizations. The most notable being the Assiek, Nohrd, and Alzeryn, these systems usually represented the capital of a sector. Housing technology beyond human comprehension, they were overwhelming to most who found themselves wildly teleporting through their streets. Sim Shavo patrols were rare in these systems and relied heavily on spies to filter information back to the Commonwealth.

These civilizations had the technological capabilities to bend the fabric of extra-dimensional reality and manipulate black holes. The Assiek were the first type 3 society to enter Qn'Tahr during The Great Dawn. Though an EARLY type 3, they created the first aurora lanes for galactic travel within Qn'Tahr. Among their top contribution was the creation of the Tarfon class harbinger vessel, an automated star cruiser that resumed in the recovery effort of new arrivals following the loss of the holy races.

Possessing the most coveted technology in the galaxy, the nomadic Alzeryn was viewed by many as traveling royalty. The appearance of their marvelous fleet in any system was a welcoming sign of peace and an opportunity for those they visited. More malevolent in their advancements, the Nohrd of Oolumne had a sinister grip on the galaxy. After betraying and defeating their Torq’Gan allies and established the Commonwealth, they seized control of aurora lanes, galactic banking, and industry. Though most tried to avoid them, their influence was inevitable.

Through Qn'Tahr's eras, ONE civilization had reached the pinnacle of technological achievement. This type 4 society could manipulate dark energy with calculated precision and had the mastery of extra-dimensional physics. They could operate on the Planck scale, allowing them to manipulate the fabrics of reality itself. Some would assume civilizations that reached this apex would act with kind benevolence, offering their advancements to elevate all societies towards prosperity. Others, like the Coathe, acted with calculated malevolence. ANY civilization below type 3 wasn't recognized by the Coathe and often fell to their technological might. They viewed lesser societies the same way most humans view insects. Through Qn'Tahr's modern era, the Coathe sought total dominance over all, viewing the galaxy as a game of conquest that only they could win.

Civilizations that had yet to develop interplanetary travel were viewed as type 0. Comprising less than 10% of Qn'Tahr's population, these societies were perceived as primitive compared to the more advanced civilizations. Differing from the others, type 0 civilizations consisted of a broad spectrum of societal achievement, development, and intelligence. All type 0 societies who entered the galaxy were initially overwhelmed by the capabilities now at their disposal. While many sought to advance themselves, the sudden access to these devices drove some to instigate wars of primitive greed.

The Rhy'Laar and Assiek famously fostered these civilizations by lending them assistance in achieving type 1 independence. Races like the Humans and Glycereon embraced their new allies' teachings and achieved type 1 within 20 dekrons after their arrival. Others like the Veliken and Hillian, though capable, chose nature over the industry, refusing to advance beyond their means.

Some type 0 civilizations had yet to develop any form of industry or basic infrastructure before entering Qn'Tahr. The nomadic Lioma tribes were still in their bronze age and often struggled to comprehend the workings of simple devices. Mishandlings were common, oftentimes leading to the unintentional death of their users. Others like the Torq'Gan eventually mastered some advanced technologies but had difficulty reverse engineering and developing the devices independently.

Most type 0 civilizations were found within the protection of the Combined. Primitive settlements also dotted the remote regions of Semprada and were typically isolated. Similar to type 1, the Nohrd often targeted these systems for nefarious purposes. The Coathe often ignored these systems unless their use was vital endeavor.